It's a Discordian April Fool's ritual, with ceremonial mummery, performance and beer. What's not to like?

Featuring the surrealist vaudeville of the New Eccentrics and the musical stylings of Portland's very own Duke of Uke, the booty-shaking fruity-making oonce oonce oonce of DJ Princess Starbright Crystal Initiatrix, plus all the madcap saints and doktors you've come to know and tolerate. Barely.

Join us on April Fool's Day, or the joke's on you. Well, it's on you anyway. Whatever. 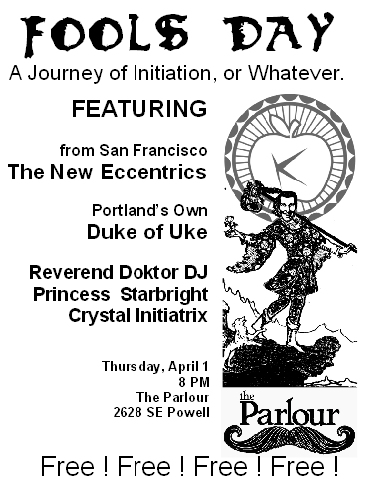 You're wasting the opportunity of a lifetime.

No, I haven't swallowed the hope pill. I have no illusions about the Obama administration, the Democratic party or electoral politics. But whatever pill *you've* swallowed must have been awfully bitter, because it's sure left you with an ugly look on your face.

I'll agree from the start, Obama won't deliver the change we want. He's an establishment candidate who's risen up within the ranks of the machine. It's not enough that he's better than the alternative- the hope he's sold millions will sooner or later be dashed.

The essence of political change is mobilization, and Americans are mobilized now like they haven't been for a generation. Right now, thanks to Obama, they're fired up. They feel involved, like they have a personal stake in the process. They want change, and they're willing to pitch in to make it happen.

Do you believe change comes from above, or from below? If it comes from above, if we're all just pawns of the ruling elites, then by all means, sit in your armchair and gripe. If Obama can't rescue us, then there must be no point, right?

But if change comes from below, if you think that the actions of "ordinary" people matter, then your place right now is among the hopeful and the idealistic. Stop scorning them for having stars in their eyes, and start organizing.

There are countless people out there right now who want to do their part. Will you tell them that they're fools and they should go back to sleep? Or will you join them, teach them their own power and guide them into standing on their own?

Their time of disappointment will come. Their hero will certainly fail them, and if he doesn't himself, the system he represents will. When that happens, the hopeful can go two ways. The first choice is to sink back into apathy or despair.

The second choice, however, is to keep on fighting, and that's where you come in. If the hopefuls rely solely on the institutions of liberal reform, then there's nowhere for them to go. But if they have access to good radical thinking, from people they trust through working together, then there's a path forward for them. And that path starts to veer in the direction of real change.

We like to say that we act not out of hate, but out of love. I've been having a hard time seeing it lately, though. Too many people right now can do nothing but criticize. We are old and bitter. We attack the very people who should be our future base.

But look at them, the hopeful millions. They want something better from our country. Their eyes shine with enthusiasm when they say "Yes we can." If these people aren't our future, then we probably don't have one.

So pick an issue and get to work. Choose something that you believe in, but also something that meets people where they're at. Don't regard the people you work with as dupes or saps. Remember back to when you first became politically aware- you probably didn't build your cynical shell overnight. Remember what it felt like when you thought you could change the world. You still think you can? Then that's the first thing you all have in common. I'm sure you'll find more.

It's been forty years since there's been such a movement of optimism and hope in America. We can wall ourselves into our activist ghetto and become more old-fashioned every day, or we can rejoin the world and starting tearing down walls instead of building new ones.

Hunter S. Thompson said that the high water mark for America was 1968. The tide's gone a long way out since then, but now it's coming back in. There's no telling how high the water will rise this time, but I'm betting it'll climb higher with us than without.

It's been a long time since I've done any political writing. I'm a little rusty, so I distract myself with a tangent.

You surely know about Cesar Chavez, right? People talk about him now and then. But how much credit do they give Dolores Huerta?

Every time you hear someone say "Yes we can," what they really mean is "Si se puede." And it's those two you have to thank for that. 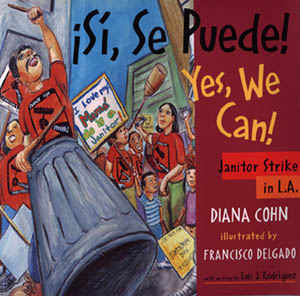 (I guess I need some new icons. The entire relevance of this one is that it's my bus pass.)

I'll post a big update on the life of Brainwash pretty soon. In the meantime, the key thing to know is my new website:

dysnomia.us
Also, i has beard. People walk by me on the street without recognizing me, even the ones who know me. If anything totally crucial has happened in your life in the last year that I just have to know about, let me know. If not, you should still say hi so I know you're out there.

Here's the Second Theorem:
The falsehood of the official story does not validate any alternative explanation.

Which leads us to the first piece of the Johnny Brainwash Patented Wingnut Detector Home Assembly Kit:
Any article that devotes more space to attacking or ridiculing those who disagree with the author than it does to presenting reasons they should agree is most likely full of shit.

I'm not only writing about 9/11, either. The Da Vinci Code craze gives us ample opportunity to examine conspiracy theory in popular culture. And this leads us to a Third Theorem:
Those who expect a given pattern or relationship will tend to find it...
and its corollary...
Those who set out to prove a conspiracy will always find it.

This corollary is why the same movement that ranted about black helicopters and the New World Order in the 90's segued so easily into the 9/11 theories of the present decade.

Because 9/11 conspiracies have popped up on my friends page twice in the last day, here's something that I scribbled on a scrap of paper that's been sitting on my table for a month now:

I approve of conspiracy theory as an aesthetic model of our relationship to power, but not as a political model of how power is distributed.
Collapse